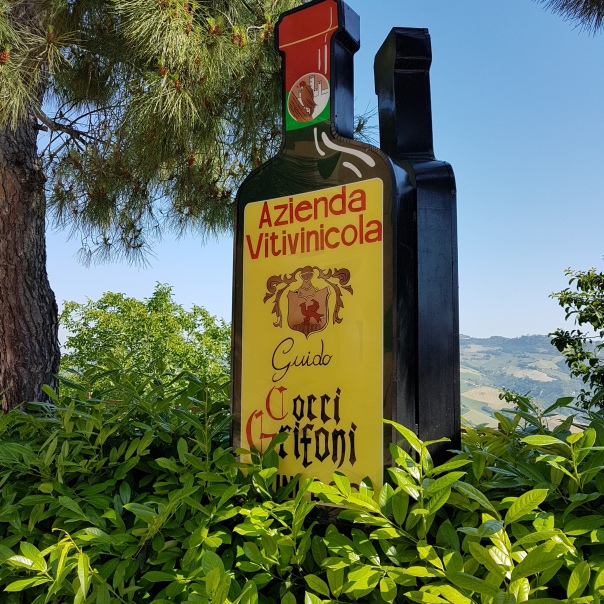 As soon as we arrive, Marilena leads us off to view the so-called two-hectare mother vineyard, Vigneto Madre, where the first Pecorino vines were planted. We’re in the Offida DOCG in the south of Le Marche to visit the historic producer Tenuta Cocci Grifoni. We gaze out over the rows of Montepulciano lining the steep slope of the historic vineyard of Vigna Messieri to the small hillock of the Vigneto Madre and the Apennine mountains beyond, Gran Sasso, Monte Sibille and Maiella, which is in neighbouring Abruzzo, the other hotspot for Pecorino. The hills are steep, which makes viticulture in the Piceno area difficult. In fact, there is only about 3% of flat land in Le Marche. 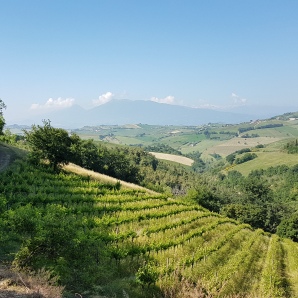 The clay soils, which Montepulciano loves, are covered with long grass blowing in the winds. Biodiversity, Marilena explains, is important for them.  They want to be able to pass on a respectful relationship with nature to generations to come. The area is well ventilated as cold winds blow over from the Balkans and there is little protection here, they always have sea breezes from the south and the east, so their wines are healthy and rich in salt – the sea is only five kilometres away. The perfect location, only an hour’s drive to the mountains and 15 minutes to the sea. 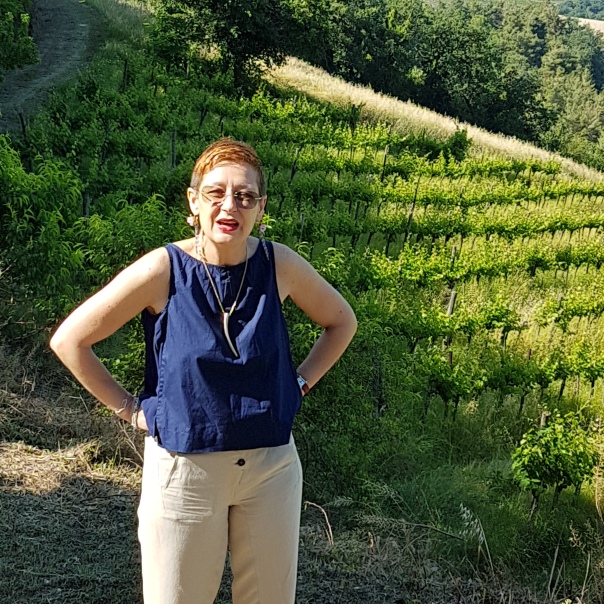 The Montepulciano vineyard was planted in vertical rows by her father 30 years ago, so-called counter polling, girapoggio. So, if it rains, the hillside will easily erode; the grass and borders they’ve retained help to prevent this. The stream we walk past on the way back to the winery and the glass-walled tasting room with magnificent views of the patchwork of vineyards and other crops flows along to their San Basso estate. The property comprises 95 hectares, 50 of which is devoted to vines, 7% to olive groves and 12% to cereals. They also allow a lot of land to lie fallow to conserve the natural habitat and allow the repopulation of flora. So, from the tasting room’s terrace, we can view the Badlands, as Marilena calls them, with patches of pine trees and broom amongst the vines, olive groves and grain fields.  Moreover, they are studying how birds reproduce in different areas in conjunction with wineries in Monferrato and the Prosecco area. We’ll also realise how important the environment is to them later when we see their labels.

Pecorino – a cheese or a grape variety?

Marilena is one of the daughters of Guido Cocci Grifoni, Le Marche’s saviour of the Pecorino variety, thus named by the shepherds because the sheep eat the grapes – Pecorino is a mountain dweller. The variety is now becoming trendy and can be found on many hip somms’ wine lists as well as increasingly on even some supermarket shelves. However, a couple of decades ago, it was almost unheard of. Her father, who unfortunately passed away eight years ago, was curious as to why Pecorino was a permitted variety for the Offida DOC, but was not actually planted, so he went in search of it. Finally, in Ascoli Piceno, he met the owner of a small, pre-phylloxera vineyard, Pescaro di Tronto. Copious research later, he discovered that the best exposure for Pecorino was north and in 1987 he planted the ‘Pecorino Vigna Madre’, and they’ve been producing Pecorino from here since 1990. He was considered crazy at the time for planting this obscure variety.

A bit of history

Her great-grandfather, returning from the States in the 1930s, built the house across the courtyard and began establishing vineyards. Her father was born there. This was still the era of the mezzadria, sharecropping, system in Italy, so when her grandfather passed away in the 1950s, his sons had to leave school in order to support the family. They gradually expanded with time, buying the San Bassano estate in the 1950s, followed by the Tara estate and then the Le Ginestre estate in 2015, where they now have an organic project with six hectares of white grapes. They produced 350,000 bottles of wine the previous year but have the capacity to make around 400,000 bottles per annum. Thirty percent of production is exported. 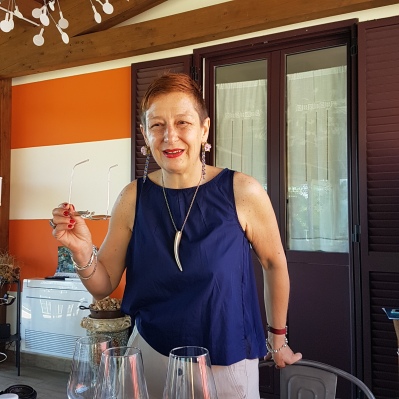 The Rosso Piceno Superiore DOC was established in 1968, but they were too late to register their wine for it that year, so 1969 was their first bottling of Rosso Piceno wine. 1975 saw the establishment of the Falerio di Collio Ascolani DOC, which permitted Trebbiano, Malvasia and Pecorino, unknown at that time.

First of all, Marilena has us taste three cru wines. The labels for the cru wines all use native animals. Animals that have a positive influence on grapes, so like kinds of steward, were chosen. A toad is depicted on the Colle Vecchio 2016, an Offida DOCG Pecorino whose grapes originate from a historic vineyard close to the Vigneto Madre. The toad was selected as both Pecorino and toads like cold environments. There is also a small lake nearby where toads love to hop around. They are positive for the vineyards as they eat insects that could damage the grapes. It’s a lovely wine, fresh and zesty, yet also chewy and creamy with lively acidity and plenty of nuts and stone fruit. Pecorino is another Italian white with great capacity to age, with Marilena telling us that wines from the best vintages can easily age for twelve years or so. Her sister Paola, by the way, is the winemaker and selected the yeasts for the Pecorino. They are natural yeasts, which are now being studied together with the University of Ancona.

Marilena very reluctantly allows us to try a Passerina. I say reluctantly as she only wanted us to try cru wines, so some discussion ensued before we were permitted to try this less noble local variety. A high yielder which is believed to be related to Trebbiano Toscano and can achieve yields of up to 120-130hl/ha. The Passerina San Basso 2017, a mere IGT, comes from an old autochthonous vineyard area and was a zingy, fresh, lemony wine with plenty of yellow fruit. The estate wines like these are represented by the wild flowers surrounding the vineyards to try to express their strong connections with the land. The Passerina label bears broom flowers, which speckle part of the hillsides near the estate. 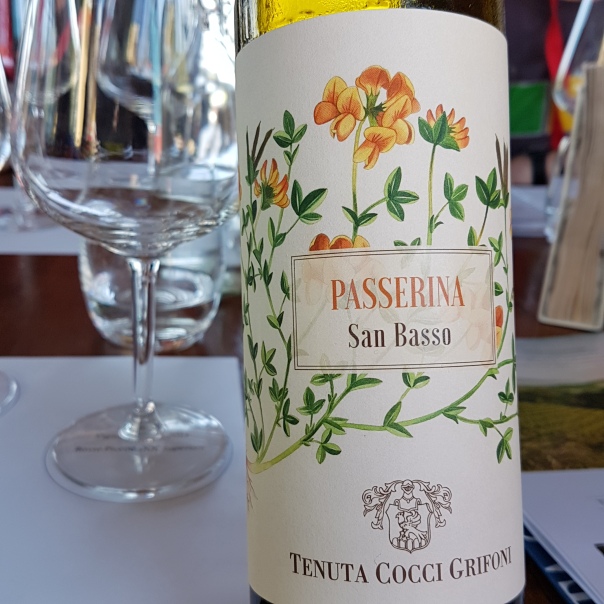 We’re back to Pecorino with the next wine, made from a small crop from the Vigneto Madre as a homage to her father after he passed away. Winning the ultimate Italian accolade, the Tre Bicchieri, the Guido Cocci Grifoni 2013 (Offida DOCG Pecorino), the first vintage of this wine, comes in a rather environmentally unfriendly heavy bottle. It’s an elegant but chewy, balanced wine with plenty of zesty acidity and flavours of honey, butter, nut, grapefruit and yellow flowers.

The final white is another Pecorino, this time with a bit of age, Collio Vecchio Pecorino 2010, aged in stainless steel and refined in bottle. They’ve only used stainless steel and glass since 2010 and made no changes when the DOCG was established in 2011. Now eight years old, Pecorino can clearly age well – a golden, buttery, rich and textured wine with flavours of honey and grapefruit and a long salty finish. Its 13.5% of alcohol, however, seemed much higher.

We then tasted a red estate wine, Rosso Piceno Superiore San Basso 2014, represented by the borage flower. A bright, fresh, easy-drinking wine with crunchy cherry and plum fruit and a slightly saline finish made from 55% Montepulciano and 45% Sangiovese. 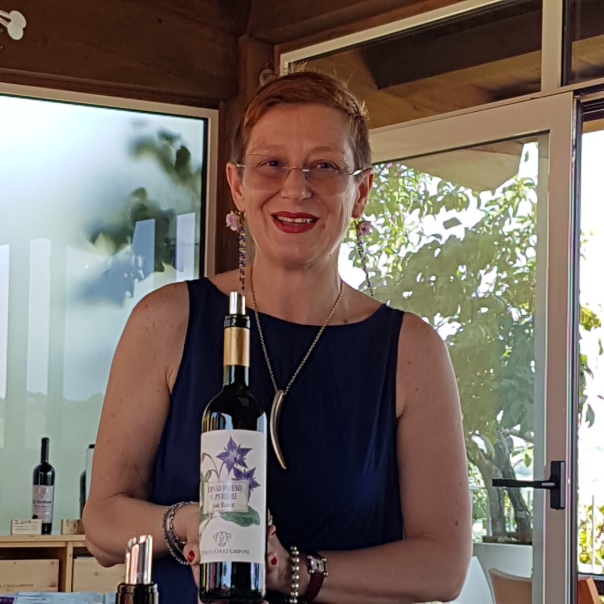 The final red was a Vigna Messieri 2013 Rosso Piceno DPC Superiore, a blend of 70% Montepulciano and 30% Sangiovese, from the historic vineyard we had visited earlier. Matured in stainless steel for 30 months followed by 18 months in 40-45 Slavonian oak, it was a balanced wine with great acidity, smoky black fruit, fresh white pepper and notes of liquorice but rather grippy tannins. I love the way that the Sangiovese freshens up the Montepulciano in the reds of Piceno.

Although we were now running somewhat late thanks to Marilena’s fascinating stories and insight into Pecorino and the organisers were looking stressed and tapping their watches, Marilena insisted we taste their homemade pizza and sip some Passerina fizz on the magnificent terrace.