In the shadow of a round town

Red is king in Puglia. There can be few people who haven’t tasted a rich red Primitivo with soft tannins and plush fruit or a structured, ageworthy Negroamaro in the guise of Salice Salentino or Copertino. The more adventurous may have also tried Puglia’s third black grape, Uva di Troia, also known as Nero di Troia, perhaps from the more northerly Castel del Monte region. You may also have sampled some Puglian rosato, maybe from Negroamaro or the rare, local Bombino Nero, quite possibly descendants of half-made red wines. In fact, there is a real tradition of rosato in the south of Italy; in the past, in the heat of the mezzogiorno, it was often difficult to macerate black grapes long enough on their skins to produce red wine without the scorching temperatures resulting in a stuck fermentation and quite possibly then a rosato. Incidentally, Primitivo also makes an excellent rosato base, with great concentration thanks to its deep colour. I even tried some rosato from one of the world’s rarest grapes, Susumaniello. 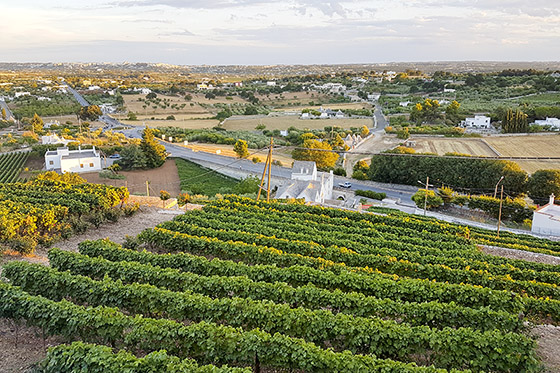 However, Puglia, despite having an incredibly long coastline, just begging for some crisp white to sip with your seafood, makes very little white wine and much of that is IGT or basic white blends, and in the past was shipped north to form the basis of many Vermouths. Much of Puglia is flat and the majority of its massive 110,000 hectares under vine – one of the largest in Italy – can be found on the limestone and sandstone-dominated plains, with iron-rich soils not dissimilar to those of the terra rossa of Australian Coonawarra. Baking fertile red earth, when not given over to vines, planted with wheat, vegetables or dotted with ancient olive groves; perhaps not the best terrain for fresh white wine. Like most of Italy, as well as much of southern and eastern Europe, the region was currently suffering in the searing forty-plus temperatures of the 2017 Lucifer heatwave when we visited, so Puglia, the flattest region of Italy truly looked and felt like the extreme south. We learnt on our first day there that they had seen no rain for over three months, but maybe some was forecast for the next day. As it turned out, some rain was thunder and lightning and torrential downpours for much of the day. But, I’m sure local agriculture welcomed it with open arms.

Inadvertently, whilst looking for a suitable holiday home, I had managed to book a restored farmhouse with a picture-postcard view of the hilltop village Locorotondo with its whitewashed houses and the beautifully restored terraced vineyards below it. Typical ’trulli’ could be seen in every direction. The property even ’almost’ had its own vineyard; despite belonging to the neighbour, as it wasn’t fenced off. We were in the heart of Puglia’s white wine country, higher lying Valle d’Itria IGT and the two white DOCs of Locorotondo and neighbouring Martina Franca.

Locorotondo DOC wine, however, proved somewhat difficult to track down. A blend of local varieties, it was again something I was keen to try in the pursuit of building my Italian Wine Ambassador experience and knowledge. Verdeca (relatively neutral and herbal with high acidity) and Bianco d’Alessano (creamy texture with autumn fruit and peach) form the backbone of the wine along with better-known Fiano, whilst Martina Franca DOC also allows the inclusion of Bombino Bianco and/or Malvasia Toscana. Restaurant wine lists generally had plenty of IGT wines, but none of the local DOC whites.

Giancarlo, the owner of our house, had alerted me to a tasting being held by a local winery, just below the lungomare, the confusingly named ’seafront’ of Locorotondo. Not actually the seafront, as we were half an hour’s drive from the sea, bur rather a natural balcony with a sweeping view over the picturesque Itria Valley towards neighbouring hilltop town Martina Franca, outcrops of trulli (local conically-shaped constructions, in the past often temporary and used as farm buildings or dwellings, nowadays increasingly for touristic purposes) and our lovely, squat farmhouse, which next to the cute little trulli rather resembled a bunker from afar. Lovingly restored terraces of vines spilled down the hillside, owned by the Azienda Agricola Bufano, who were conducting the tasting. This was the venue for the tasting: the terraces we could see from our house. Giancarlo later told me that they had only been recreated around three years ago; previously they had lain in ruins.

After a flurry of messages, I managed to sign myself up for the tasting. Unfortunately, I hadn’t looked at the wines on their website beforehand or I would have noticed that they produce principally sparkling spumante rosato from Primitivo in brut, extra dry and amabile styles. The tasting began nearly ninety minutes late, Italian style, to let the temperature drop and allow for latecomers, so it began just as the sun went down amongst the Minutolo and Primitivo – neither variety permitted in Locorotondo DOC, so Valle d’Itria IGT – planted in the terraced vineyards along with 750 rose bushes. A stunning setting for our crisp white Minutolo, Prosecco!, six spumante rosato and two red Primitivo wines. Tasting with the locals ended up as a slightly raucous affair with wobbly tables spilling glasses domino style, several dogs in attendance and due to restrained, or mostly lack of, use of the spittoons and a bottle of each wine placed on each table for us to pour ourselves, some rather merry Puglians by the end.

At the restaurant we chose for our last evening’s meal (U’Curdunn), as well as serving excellent local food in very congenial surroundings, the wine list finally came up trumps, boasting two Locorotondo DOC wines. The waitress recommended the Cardone Castillo Locorotondo 2016 – a lovely delicate wine with aromas of jasmine and sweet fruit, ripe mango and peach on the nose and palate, well-structured with fresh acidity, a touch of salinity and a relatively long finish. A delicious finish to the Puglian adventure.

*This article first appeared on WineSofa, the first and only comprehensive website in English focussing on Central and Eastern European wine.